Unprecedented Access to One of America’s Most Haunted Houses

Like many in the Chicago area, my first exposure to the Stickney House, tucked away in rural and picturesque Bull Valley, was Ursula Bielski’s “Chicago Haunts” in the late 1990s. The rich history and the seemingly endless claims of hauntings have proliferated the house and its grounds as much as the story proliferated my curiosity.

As the story goes, in 1856 George and Sylvia Stickney moved into this grand house to start a family and be the toast of the town with the second story of the house serving almost exclusively for entertaining.  However, tragedy struck early and often as seven of their 11 children died very young.  That ballroom, housing the first piano in McHenry County, quickly transformed to a séance room where the mourning parents would try to contact their lost children.

My first visits to the site in the early 2000s were merely to view the iconic structure from a distance, to see with my own eyes, the rounded corners and the boarded-up second story windows.  Many feel the rounded corners (note the walls blending into the ceiling in the photo to the right, as well as the rounded wall edges in the image below) being tied to spiritualist beliefs that spirits (particularly negative spirits) could get trapped in 90 degree angles.  There is some debate if this was the reason for the construction, but that is the commonly held notion at the moment.  The second story windows were, indeed, boarded up, presumably to keep away curiosity seekers who were getting strange images of ghosts in the upper floor windows in photographs.

Walking the grounds one October evening, a friend and I heard a masculine voice groan loudly from behind the door that faces the parking lot.  We were absolutely frozen, but no further activity followed.  That interaction is benign compared to other claims of phantom screams, ghostly dogs, children crying and even shadow figures patrolling the grounds around the house.

After so much infamy, the village moved their offices into the home, partially serve as a built-in deterrent to any trespassers or vandals.  It’s easy to respond to a trespassing call, if you just have to walk out the front door, after all.  At this time there were legends that city employees were forbidden to talk about the activity at the location.  Whether true or not, a Chicago Tribune article from 1995 did a lot to pass along that “company line.” (link: “Bull Valley Home Haunted Only By Reputation.”)

In October 2015 I stopped by again, after a gap of many years.  I could see that the restoration of the building was well under way with the front entrance fully rebuilt.  I entered the front door, explaining that I was a local historian who was interested in the site.  Unlike 10+ years ago, this time I was invited in and could see that the “no corners” theme was carried out throughout the building, including a curved front door, built-in cabinets that blend into the walls and the walls themselves blending into the ceiling.  This time it was the village employees who started volunteering their own paranormal experiences. 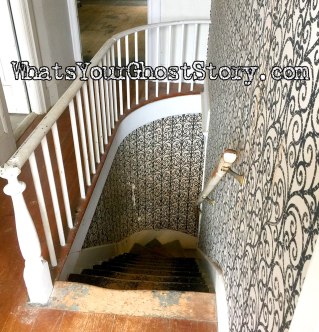 The following October, just a few weeks ago was even more amazing.  I traveled back to the site with local archeologist Dan Melone.  I re-introduced myself to one of the employees I had met the previous year and after some chatting about the paranormal, he gave us the blessing to go upstairs.  I cannot over state my excitement in this moment.  Visiting a place I’d read about and researched for nearly 20 years, and now I was standing in a location that I’d mentally accepted that I’d probably never set foot inside.  Merely entering the home last year was a huge surprise and now, I was creeping up a very worn, narrow stairway, making my way into the largest room and standing in the room where Sylvia Stickney, her husband George and countess other mediums went to make contact and, make no mistake about it, come to terms with their devastating losses.  The gravity of the history and the location gave me goosebumps.  The feel of the room was tense, though likely just my own excitement radiating off of me.

Present day, the second floor isn’t one massive ballroom, as is often reported.  It’s been subdivided into smaller rooms, a far more practical use of the space for the numerous inhabitants after the Stickeys.  With the help of the Stickney Restoration Foundation, hopefully the original layout will be firmly identified and restored in time.

In addition to the experience we found out the following amazing bits of information:

In time, the village hopes to move their offices out of the Stickney Home and allow the site to function as a museum.  After it’s established as a museum, they will rent the site out to ghost hunting teams for investigations!

There are reports of a Civil War era soldier that is seen in the front room, nearest to the parking lot.  Speculation is high that he died of wounds here after being injured in battle further south.  This would line up with the pained masculine groan I heard come from that room some 16 years earlier.

One village employee relayed the following first-hand account: I am a marine, I saw combat, I was a police officer on the street, but the only time I’ve ever frozen was right here.  Working alone, late at night and a man screamed.  I knew no one was in the house.  It took me a good five minutes to be able to move again.

Dan and I did not wait long to return for another visit.  Shortly after another successful Chicago Ghost Conference, this time held at the haunted Willowbrook Ballroom on Archer Avenue (which tragically burned to the ground a couple weeks after the conference), we brought event organizer, and writer of the “Chicago Haunts” series, Ursula Bielski, to the Stickney House.  She’s an important part of the Chicago ghost lore tradition and, again, the person who, through her writing, first informed me of this location.

Again, we were permitted upstairs where Ursula, spirit box in hand, began attempting to make contact with whatever entities may still be on site.  Watching this unfold, it again donned on me that this may be the first time someone, other than a curious village employee, was using the séance room to try to make contact in some 150+ years.  In a small way, a historic moment.  While a couple scattered words did appear over the spirit box, we did not get any longer phrases or sentences, which is what I personally look for to push out my reason of doubt against radio interference.

Stay informed right here as I hope to start a working relationship with the Village of Bull Valley, along with Dan Melone and Ursula Bielski in helping raise funds for the restoration efforts and perhaps seperate fact from urban legend at this amazing site.