Did you know that a CRAZY amount of Academy Award Theaters are haunted?  This goes all the way back to the very first award ceremony back in 1924. 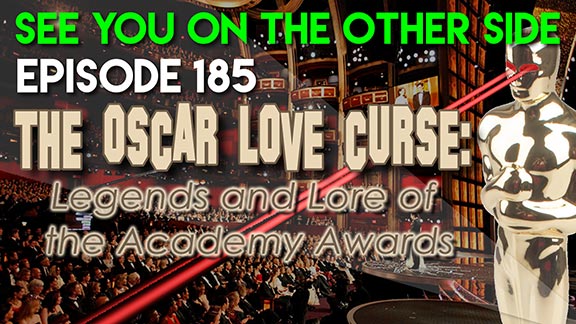 Recently, I was fortunate to be back on the “See You on the Other Side” podcast to discuss the “Oscar love curse,” which is the idea that after someone wins an Oscar (usually referring to women) their relationships end.  And in the process we went into a whole bunch of different ghost stories revolving around celebrities (click on the image to listen to the full episode).

One thing I was hoping to get into that we just didn’t have time for on the episode was the surprising amount of Oscar theaters that are haunted.  In order, from newest to oldest, here’s the list: 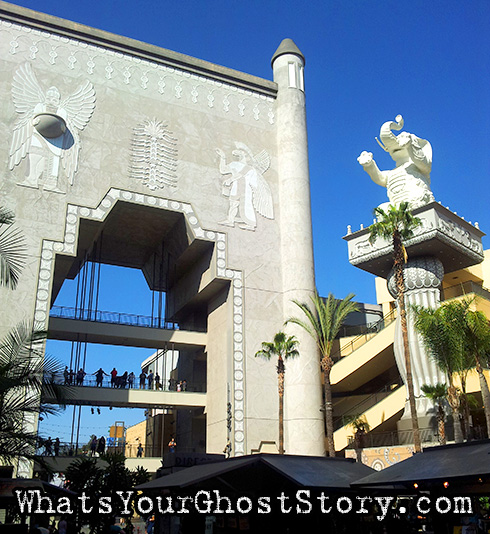 Located at the Hollywood & Highland Center, (pictured right with a portion of DW Griffith’s “Intolerance” set rebuilt to the same, massive scale as the original), the Dolby Theater was called the Kodak Theatre when it first opened just back in 2002.  The location recently hosted their sweet 16 Oscar ceremony.  It’s not known how actively haunted this place currently is, but it’s built on the site of a known haunted location.  Long ago the Hollywood Hotel stood on this location and was one of the many places where people would encounter Rudolph Valentino’s ghost.

I should do a full article about him. I always called him ‘Hollywood’s most traveled ghost,’ because he is apparently seen in over a dozen places around Los Angeles as well as a half dozen or so places in New York.  So, his loss of life has not slowed him down at all.  He is still the quite popular person and, of course, was the silver screen’s first sex symbol, who died at a very young age.  His death left so many people hurting that there are still annual funeral services held on the anniversary of his death, some 90 years later.

There are reported suicides that came about as a result of his death as well as injuries sustained as his body made its way from New York to its current and final resting place at Hollywood Forever Cemetery. 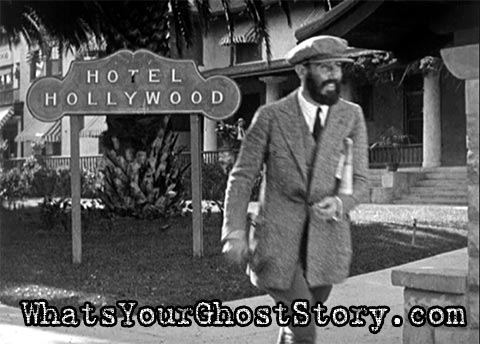 At the Hollywood Hotel (pictured left from a 1922 film titled “Hollywood Snapshots”), women would say that his spirit would appear there and give them a kind of a spectral goodnight kiss from the other side.  Naturally, that room was booked out far in advance because everybody wanted them to have one last encounter with Valentino

Is Valentino still hanging out where the Oscars are currently being held?  Who’s to say?  We haven’t heard anything yet.  If you’ve heard anything about hauntings at the Hollywood and Highland Center I’d be very interested to find that out.  It’s possible stuff is going on, but there’s just so much chaos and commotion that it’s hard to notice it.

Pantages Theater, 1950-1960
This is an interesting spot that was on the LA hauntings tour I used to give and still love coming here because most of the time we were telling ghost stories that are dark, sad or negative.  This seems like it’s a place where people love to come back.  So, this is kind of a happy ghost story location.

Howard Hughes’s presence is still felt there frequently, as he owned the building during the decade it hosted the Academy Awards.  It’s associated with the smell of cigarette smoke.  You’d think this guy must have smoked like a chimney but of course we know this guy was very neat and proper.  He despised cigarettes.  So, it’s interesting that we now associate the smell of cigarette smoke with Howard Hughes.  You wonder, is it some former employee who’s smoking in his office and heard Hughes walking down the hall?  He’d be freaked out because he knew he’d be in trouble and that bit of an imprint to this day.

There’s also apparently the ghost of a rabid theater goer.  Now that she’s on the other side, and doesn’t need to buy tickets, she’s enjoying show after show.  She’s enjoying herself so much so that she sings along to the performances.  She even keeps up with the more modern performances that have come around after she passed away.  Apparently she’s able to pick up new tunes.  It’s alleged that she’s even ruined some recordings because her off-key loud singing that’s picked up on recordings. 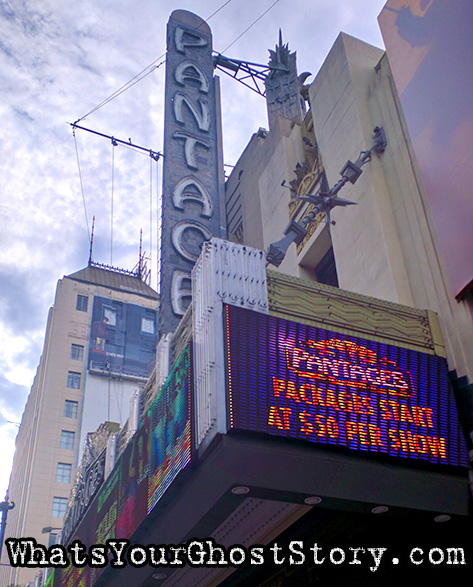 I could good in depth about Alexander Pantages, who opened this theater.   He had a conspiracy against him that’s pretty well documented by the Kennedy family.  It’s all really fascinating stuff.  Pantages himself doesn’t haunt this location, though he had 80 some locations across North America.  Maybe his presence is still felt at one of those.  This was the last building he built and he did not have a positive experience here in LA.

My favorite ghost story about the Pantages revolves around a wardrobe person who was cleaning up after a performance one night.  She was the last person in the building.  The lights shut off on their own and in the darkness she tripped over something and fell.  She had a moment she started to panic.  Then, out of the darkness, someone grabbed her warmly by the arm helped her to her feet.  They walked with her all the way up through from the main room, through the lobby to the front doors.  She opened the door and waited for the street light from Hollywood Boulevard to stream in so she could illuminate and thank her rescuer, only you see that there. 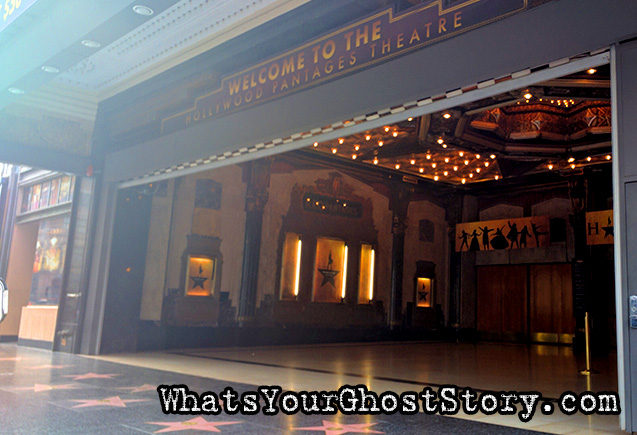 Again, a protective presence made its presence known.  It’s interesting to note that even though this building went up long ago, the activity didn’t start till more recently.  In the early 90s there was a break-in and a lot of damage was done to the upper balcony area.  It seems like ever since then, the spirits that maybe were sitting there dormant, have taken a more active role in protecting the space.

In the land of hand prints in concrete and poorly constructed Ironman costumes, Victor Kilian spent one of his final evenings.  He was killed in his home nearby, but this was one of the last places he visited in life.  He was a character actor who made guest appearances classic TV shows of the time and western films in an earlier era.  We don’t know how his life came to an end other than murder by a still unknown assailant.

Late at night at the Chinese courtyard you can have a quiet experience here.  People encounter an elderly man who seems kind of confused or lost.  In the process of trying to help them out, he vanishes.  People believe that this is Victor Kilian.

Two alternating locations, 1930 to 1943
Ambassador Hotel
This is, most famously, where Robert Kennedy was killed by Sirhan Sirhan.  People claim there are hauntings associated with the assassination but it’s hard to get a read for that.  Is it just that that event was such an important moment in the fabric of American history to this day?

Like Linda Vista Hospital, when it went out of business it became a movie set.  I talked with very good friend, DJ MacHale, who wrote and directed the movie “Tower of Terror” for Disney at this location.  He said he talked to the caretakers of the location and as well as his crew members and nobody reported any odd feelings.

However, there were some stories about a woman in white seen beckoning from a fourth floor window as well as activity in the Coconut Grove which was the swingin’ nightclub that was part of the hotel.

However, we won’t know anything more about this location as it was bulldozed in 2005 to make way for a high school.  We shall see we if any stories emerge from these students and teachers at this location.

As a footnote, I gotta say, my favorite dive bar in Los Angeles is right across the street: the HMS Bounty.  It’s an old, dungy, dark, nautical-themed dive in the lobby of the Gaylord hotel, which is a classic old hotel put up by Gaylord Wilshire.  Wilshire, of course, was the big developer who Wilshire Boulevard is named for.  Additionally, it’s in this building’s downstairs salon (now the laundry room) where Marilyn Monroe had her hair first dyed blonde.

This building, from the bar through out the residences, does claim some activity.

The Biltmore to this day, I think, is the most beautiful hotel in Los Angeles.  It should be noted that its most famous ghost is a cinema icon:  Slimer.  This located doubled for a snooty New York Hotel where the Ghostbusters encountered that “ugly little spud.’

That said, the biggest hint of why we’re talking about this location is located in the bar, where you can order yourself a drink named after a young actress: A Black Dahlia martini. Elizabeth Short is still one of the most mysterious cold-case files in American history.  Something that I hope paranormal investigation gets to the bottom of in time may be a scrap of evidence that helps us get to the bottom of this murder (If anybody needs a memory jog, she went missing for a number of days and the next time she was ever seen again her body was found cut into pieces in a field just barely off the road on Norton Street in the area that is now the Crenshaw district, just south of the ten in Mid City.

We don’t have any clue really what happened to her, but the last time Elizabeth Short was seem was in the lobby of the Biltmore Hotel frantically making phone calls.  Eventually she went outside, got into a car, and was never seen alive again.  Some people have claimed to see her spirit in the area of the phone banks to this day.  Now wouldn’t it be interesting if somebody doing a paranormal investigation picked up a clue during an EVP session here?

Check out the video below for a video tour I did with Max Timm and Connor Bright as we visited locations important to the Black Dahlia story including the Biltmore and the location where her body was discovered.

Stay Tuned for PART 2 coming in just a little bit.  Spoiler warning, Part 2 consists ENTIRELY of the haunted history of the Roosevelt Hotel!  I think it’s the most actively haunted public building in LA and I am thrilled that I’ll be posting some brand new stories about that haunted site!  Stay up to date by signing up for our free newsletter!