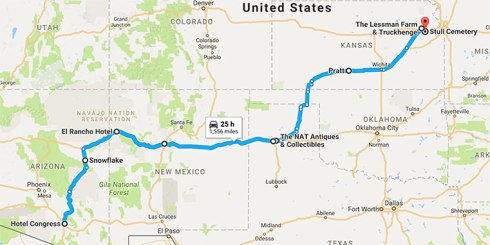 One of my personal favorite videos I’ve ever put out involved how to take a haunted road trip from LA to Vegas.  This year, I set my sights a little bigger and covered a lot more distance, this time taking a trip from Tucson, AZ to Madison, WI, with Wendy Lynn Staats, drummer and violin player for the rock band, Sunspot.  They’re a group that features a lot of songs with paranormal or geek culture themes.  If interested, check out some drone footage I shot of the band here:

Tucson, AZ itself has some great haunted sites, but perhaps, as a Chicagoan, none stand out more than the place that lead to the (temporary) downfall of John Dillinger’s crew.  The Congress Hotel had to serve as a temporary landing spot for the gang of outlaws as the house they rented was not yet ready for them. 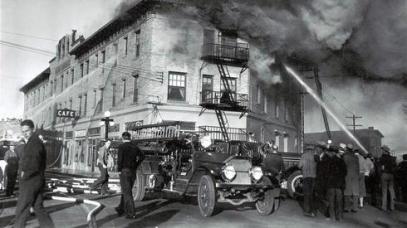 One early morning, fire broke out and the gang, like everyone else, was forced to stand on the street to watch fire envelop the hotel.  Knowing they had some precious cargo inside, a firefighter was convinced to go retrieve their luggage.  In appreciation, the firefighter was given a significant tip.  The following day, the firefighter in question happened to see a photo in True Detective Magazine of the generous tippers.  Within two days the entire crew was arrested, setting the stage for one of the most famous and clever prison breaks in history, that being the escape in the warden’s car in Crowne Point, IN that is described in detail in “Voices from the Chicago Grave.”  (further reading on John Dillinger’s time in Tucson here)

The Hotel Congress boasts many old time amenities and a whole slew of ghosts who continue to make their presence known.  There’s a maid in one of the halls, a cowboy in the basement, a war vet barfly who continues to tell stories to anyone within earshot and the second floor offers a variety of haunted rooms including the positive (room 220, long time resident still hanging around) and the very negative (suicide deaths leading to hauntings in rooms 214 & 242).

No time to stop for the night this time around, so we headed due north toward the tiny, remote town of Snowflake, Arizona.  Snowflake is famous for one thing and one thing only – this is the site of the most famous UFO abduction case in history.  It was here at the in 1975 that Travis Walton and six fellow loggers encountered a UFO.  Walton ventured from their truck and ended up getting abducted.  He was gone for five days.  The story may be familiar as it’s the basis for the feature film “Fire in the Sky” (trailer below).

The Apache-Sitgreaves National Forest, where Walton was working, is enormous.  We drove in total darkness for a disorientingly long amount of time.  I had designs on finding the exact location where the UFO encounter happened to try to take some readings, as I’ve heard that there’s still a radioactive signature here.  However, I did not plan for the forest being nearly 3 million acres.  The next best option, which is really a goldmine when getting to the bottom of local lore, was finding a local bar to talk to the regulars.  We passed one or two small dives that appeared to be closed for the night before finally locating a restaurant/bar that was open.

Sadly, this venue didn’t quite have the local flavor I was hoping for as it appeared to cater to time share ‘owners.’  Still, the place had to be staffed by locals who knew all about the tales, right?  I mean, after the most famous UFO story since Roswell, have there been other sightings?  Do other UFOlogists swing through often to see the place for themselves?  What about Bigfoot sightings?  There tends to be a correlation between places with a lot of sasquatch sightings and UFO activity.  With so much woodlands, I can imagine all sorts of cryptid sightings!

“So, do you know about the UFO history of this area?” I asked our bartender.

“Um, no,” the smile leaving my face.  “Just down the road from here was the most famous UFO abduction case in the world.  There was a big Hollywood film made about it.”

“Oh,” she said before turning around to dry glasses.

“Oh?”  Just “oh?”  I will never understand how there wasn’t a string of follow-up questions to my statement.  I guess I’m a researcher and others are not.   ….but still!  A Hollywood movie was made based on events in your town and you have zero interest?  A UFO plucked a dude off of your sleepy street and you’re not interested?

Clearly, we were barking up the wrong tree and we had a lot of miles left to drive.  Our camp for the night was just over the border in the beautiful town of Gallup, New Mexico.

Gallup’s picturesque landscapes made the town a natural fit for countless movies over the years, particularly westerns.  However, it’s here that one of my favorite movies of all time, Kirk Douglas’s “Ace in the Hole” was filmed.

All of those crew members and movie stars had to sleep somewhere while in town and where better than a hotel opened by Roy Griffith, the brother of the legendary director DW (“Birth of a Nation,” “Intolerance”)?  Today, the El Rancho Hotel is considered one of the most haunted locations along Route 66.

The two-floor lobby with the wrap-around balcony proudly displays vintage, signed black and white photos of the stars of yester-year who once stayed there.  Some rooms even display names on them, presumably honoring past residents.  It’s in this upper lobby where people have heard phantom conversations, singular voices, footsteps and laughter.

Among individual rooms, the bridal suite claims the most activity, but neighboring rooms also report objects moving on their own, doors opening by unseen hands and the unwelcome wake up call of the curtains flying open on their own at the crack of dawn.  Apparently a long gone crew member doesn’t want to miss their call time.

A glance around different travel or review sites also recounts tales of unexplainable phenomena in the John Wayne room and the Susan Hayward room.

By lunchtime we had made it to another location that is intimately associated with a Hollywood production…..and meth.  Yep, Albuquerque!  Perhaps no law enforcement agency takes stopping the spread of meth more seriously than the town where the movie “Breaking Bad” is set.  For the 18+ crowd, ya gotta check out the Candy Lady, a candy store that sells X-rated sweets.  No haunting here, but this is one of the ‘weird’ trip highlights. 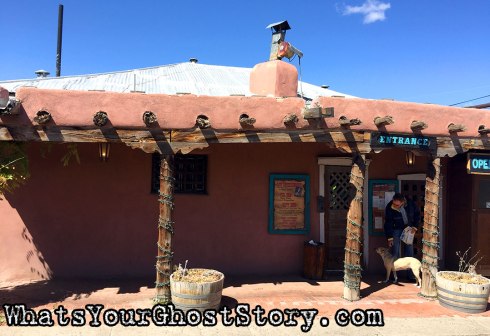 We, however, had our sights set on margaritas and the High Noon Restaurant and Saloon and they delivered!  The building itself has to be one of the oldest still existing structures in the United States as it was first built in the 1750s.  The building has long reported the presence of a woman in white in the Santos room (pictured to the right, note the saint statues in the alcoves), but the current owners have been feeling more and more unsettled.  Something isn’t right here.  That’s what led them to reach out for help in the form of Travel Channel’s “The Dead Files.” (read more on that here). Clever marketing ploy or legit paranormal drama, we had a lunch that more than hit the spot.

Bellies full of great food, we took a little walk before jumping back on the road.  In the process, we got a look at the Covered Wagon, a store that contains a ridiculous amount of Chile Ristras (bunches of hanging chili peppers, picture below) and the legend of a ghost named Scarlett, a prostitute who was murdered on the site when the building was a brothel.  She was allegedly stabbed by a fellow ‘working girl’ and died of blood loss before help could arrive.  Due to the clandestine nature of the building, there are no official records to confirm or deny that this crime took place.  Whatever the origin, the building and the immediate surrounding area seems to be visited by a female presence, who is not always clothed.  You heard me. 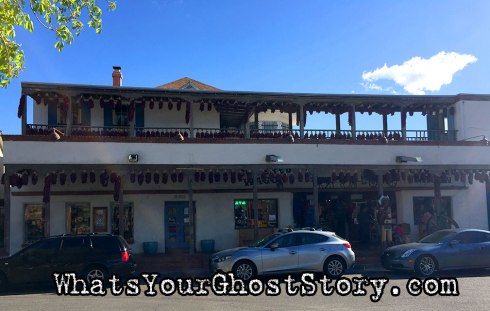 In the same square is the La Placita Dining Rooms (picture below).  The business itself has been in operation since 1935 while the building itself went up sometime prior to 1880 (some sites claim 1706 as the building date).  We talked with one member of the wait staff who confirmed that he had coworkers with paranormal stories but he himself had yet to experience anything of note.

According to various web sites, there are four known ghosts here, but only two or three are ever identified.  One is the ghost of a little girl who appears as a reflection in the women’s room mirrors while the other is a visage of a woman in full bridal gown seen descending the stairs.  The most unique and perhaps common visual anomaly is a fog or a mist that appears hovering over tables and lingers for a time before again vanishing.  Is this another specter attempting to form?  Perhaps time will tell.

Tune in next month for the next installment of the weird and haunted road trip, which will include infamous and ya-gotta-see-it-to-believe-it sites in Texas and Kansas!