This is a review of the horror movie, “The Nun,” but we also get into a lot of real life Ghost Stories in LA, the mysterious death of Elisa Lam at the Cecil Hotel and the Bell Witch Cave in Tennessee. 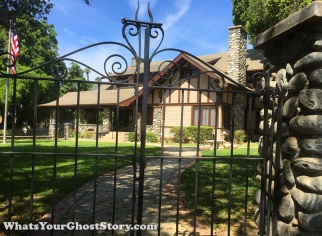 Glendora’s Bennett House, built in 1905, was purchased by the Daughters of the American Revolution and they found out quickly (during their very first monthly tea party meeting) that they weren’t alone in the home. The visage of a phantom man crashed the party before vanishing.  Occupants also talked about hearing sounds of objects moving, but not seeing anything out of the ordinary happening; this seems to be a common residual-type haunting.

It’s unclear if much activity has taken place in the house since that first encounter with the vanishing man in 1982.  It’s not uncommon for paranormal activity to spike when a building undergoes a change (renovations, new inhabitants, etc.). Maybe once the new owners settled in, the spirits settled back down as well.

This is not the only haunted residence in Glendora as John Zaffis, founder of the Paranormal and Demonology Research Society of New England (not to mention that he’s the nephew of famed demonologists Ed & Lorraine Warren) investigated another affected home in Glendora on his show, Haunted Collector.  Read more about that story at Glendora Patch.

Do you know of other haunted sites in Glendora?  Have you experienced anything yourself at the Bennett House?  Were you there at that famed 1982 tea party?  As always we wanna hear about it?

By scottmarkus
I recently had the experience of having to do jury duty and…. had a great time!  I am one of those “lucky” people who have actually gotten called for jury duty three times in the last three years.  Yes, I have gotten out of it in the past with legitimate reasons I was unable to serve.  This time, however, I gave it a go.  Okay, I did try to get out of it a few times until it got to the point that trying to get out of jury duty was more of a nuisance than actually serving jury duty.
So, to show off the bright spots of jury duty and to provide you with a jury duty survival guide, I wanted to create this post.  If you’re on this site, I imagine you are interested in ghost stories, local history, crime history, Los Angeles and visiting museums.  If you keep an eye on these themes, then serving jury duty is downright exciting!  I know that sounds like BS, but stay with me here.

The first part of jury duty and truly the only part that most people experience is being in the “jury pool.”  It’s just a big waiting room full of people hanging out.  Honestly, is that so bad?  Most people keep themselves busy with their iPads, phones, laptops, etc.  There is Wi-Fi, so it’s not a bad way to get some work done.  I, on the other hand, did a lot of reading.  I got deep into a fascinating book on the Prohibition era that deserve its own blog entry.  However, if you are serving jury duty in downtown LA, I would strongly suggest reading “A Bright and Guilty Place: Murder, Corruption & LA’s Scandalous Coming of Age.”  This amazing book covers the frequently lawless and corrupt age of life in Los Angeles, a town that was growing faster than its infrastructure was ready for. The book covers topics like the Castaic Damn disaster and Clara Bow’s blackmail case.
Back to jury duty.  Each day you get a 90-minute lunch.  That’s crazy!  What’s more crazy is that most people stay local or even eat in the building.  In 90 minutes, you can walk to a lot of great places, taking a nice tour in the process.

After giving quite a few tours and frequently losing tour members to Mr. Churro, I decided that this was finally my time to check the place out.  Leaving 210 W. Temple (pictured, top with the white Pico House building visible on the far right) and walking North up Spring Street, you get a lot of great views of the Pueblo de Los Angeles area (pictured directly above).  This is our destination and also where the city of Los Angeles was born.  On your left, you walk past the largest cement military memorial in all of America, a tribute to the Mormon Battalion and the site of Fort Moore (pictured right).

Crossing the next overpass gives you a great perspective on exactly how much of the original Moore Hill (specifically the land that was Moore Hill Cemetery) was dug out to make room for the 101 freeway.  Yes, in a tale straight from the movie Poltergeist, a cemetery was moved (said bodies are now located in Rosedale Cemetery in the West Adams neighborhood, by the way).  Yes, there was a school (that crazy stainless steel building) that was built on a former cemetery and yes, that is a haunted building.  Bodies from the original cemetery were found on this site from the original cemetery as recently as 2009.
Continuing down Spring, you’ll eventually make a right at the corner of Spring and Ord.  This is the site where, not all that long ago really, LA was gripped by the possibility that huge quantities of buried treasure was hidden underground throughout LA.  Who put this treasure here?  A now extinct species of 6 foot tall reptiles, of course (this is a true and strange footnote in LA’s already strange enough history).

Now turning the corner and heading through Chinatown, you get a nice look at the ornate dragons that keep watch over the neighborhood before walking a couple more blocks to Olivera Street.

Getting here has only taken about 15-20 minutes out of the 90 minute lunch, so there’s even time to visit the free Old Plaza Fire House museum (pictured left, with City Hall in the background on the right edge of frame), which is really not much of a museum, but you do get to enter one of the original fire stations in LA and see some of the vintage fire fighting gear and impressive photos of the LAFD in action through the years.
To read more about this haunted history of the Pueblo de Los Angeles including Pico House, the Avila Adobe (also a free location to visit) and La Gondoloria Resuaturant, check out my article here.
I grabbed my lunch to go (it did live up to the hype) and walked back to and past the courthouse building to have lunch in LA’s Grand Park.  It’s no Grant Park in Chicago or Central Park in New York, but the city has done a lot to create a gorgeous, large park right in the middle of this portion of the city.  In addition to a nice aesthetic, there are exhibits worth viewing including quotes and pictures from survivors the Armenian Genocide (pictured below, right with City Hall looming in the center of the image and the criminal courts building on the left).

Day 1 ended with me actually getting assigned to a case.  Though most cases are only 1-2 days, this one was estimated to take 6 days if I was selected to the jury.  This was not a lock as I was one of about 50 people to make it to this stage.

My second day of jury duty started around 11am or so and after just 60 minutes of jury duty, it was time for my 90 minute lunch.  It’s amazing anything gets done, really.

Unfortunately, on this day it was raining, so I decided to see what fun I could have in the building. Unfortunately there is no top floor observation deck, but I did find a museum-caliber display covering both the 17th and 18th floor of the building. It’s amazing!

The displays are floor-to-ceiling and do cover every lady square inch of the walls on the two floors. The display is a timeline of crime in LA (technically, it’s about the district attorney’s office, since we are on the floor the D.A. is on).

The perspective is interesting, looking at the history of Los Angeles as it relates to crime, from the 1871 Chinese Massacre through the Griffith J. Griffith attempted murder case in 1903, the 1910 LA Times building bombing, Bugsy and Mickey’s Mafia control in the ’30s, the career-ruining Pantages trials the Manson Family trial, through the modern age of the LA Riots and the OJ trial.  Among the more well-known stories are some tremendous events that today are largely forgotten.
Did you know that there were sea battles just a few miles beyond the Santa Monica Pier between authorities and floating casinos?  It’s a saga that went on for years and somehow we haven’t seen a movie based on these events yet(?).  Tony Stralla’s name appears on these walls a couple of times.  Before he went on to create the Stardust Casino on the Vegas strip, he was a prohibition-era bootlegger and casino operator in the soutland.

This location also ties in beautifully with the afore-mentioned book, “A Bright and Guilty Place,” as pretty much every event covered in the book also appears on these walls, as well as personalities like Dave Clark (an LA City prosecutor who got his hands dirty and bloody more than once) and Burton Fitts.
LA’s DA office is about to move to another building, so this exhibit will not be here forever, so whether or not you have jury duty, this is a public building, so make sure you make time soon to go up and walk these halls.
Another must-do in this area is check out the observation deck on the LA City Hall building located just across the street from the Clara Shortridge Foltz Criminal Justice Center, named after the first female lawyer on the west coast.

Jury duty or not, this location offers some of the best views of downtown LA and is a must visit.  Sadly, the view towards the Hollywood Sign and the Griffith Observatory is frequently obscured by smog and other larger buildings in the area block some other ideal sites, but it’s still well worth the visit.  West Hollywood, the Brewery artists lofts and, much closer Broadway and the Walt Disney Concert Hall.  This is specifically a way to handle jury duty here in downtown LA, but when it comes down to it, no matter where you are, you can find an interesting way to entertain yourself.  Turn it into an opportunity.  How often do you have 90 minutes to kill away from home?  We’re always in a rush nowadays and you can use this time to your personal benefit.  The fact that you’re also pridefully doing your duty as a US citizen…. also a nice perk.